You are visiting our English store. If you want to change to the one in Spanish you can do it here.

Now reading: PINK PP: A story of Valentino, Pantone and the color of the year
Next With the arrival of the Valentino Pink PP collection to our stores, we wanted to celebrate with a proper post about it. Although seemingly late to the party, there is always more to be said about the sensation that is Pink PP. The partnership between Valentino and Pantone is more than just a new hue of fuschia. The Pink PP phenomenon is a philosophy, a message of hope, and a breakthrough for a society reemerging in a post-pandemic world. Pink PP symbolizes our newfound freedom and a desire to stand out.

The color pink has quite the longstanding story of its own. In recent years, it has come to  symbolize features like hyperfemininity, delicacy and a certain youthfulness. Notwithstanding, these weren’t always the associations made with pink. In fact, pink was a color often assigned to manhood. It referenced strength, bravery and a more flamboyant spirit than the more demure tonalities of colors like blue. Blue was associated with femininity, as it was closer to tones like white, often used to represent purity and more angel-like qualities.

The shift to the color associations we make today is said to have begun in the times of First Lady Mamie Eissenhower, in the United States. Her inaugural pink dress with over 2,000 embroidered rhinestones seemingly steered the societal wheel, and set the stage for pink to be now linked to the ultimate representation of womanhood. This historical 1953 moment, along with other societal norms established in the same decade, meant a new conception of the world was born. Although understandable in a post-War society, the meticulous organization of the West would then undergo subsequent bends and alterations with the rise of modern art and modern entertainment. These twists and turns bring us to the 2000s, where the color had achieved its highest degree of representation of femininity. From the rise of lingerie to certain mainstream doll lines dominating the collective mind, it was now the norm to be a girl and wear pink.


Later on, the daring style of the early noughties was subdued by the growing aesthetics of Scandinavian influence. The switch gave way to the rise of creams, whites and neutral tones. Not shortly after, we were locked at home. Two years later, having overcome the skepticism of the post-pandemic stage, our world craved a revindication of freedom. The return to live events and the resurgence of our joie de vivre, one century after the original Roaring Twenties, culminated in moments of camp and bold visuals such as Pink PP. Its name stems from Pierpaolo Piccioli’s initials (P.P.). In itself, the color mixture of fuschia and deep purple, giving it that striking, cool undertone. This hue is a full visual statement. The tone is said to be a counterpoint to the hegemony of the neutrals and nudes currently dominating worldwide aesthetics. The potency of the color is a complete sensory embrace. Writer and artist Douglas Coupland is the mind behind the color, known for other culture-defining moments such as the expression ‘’Gen X’’. The artist and devoted lover of the color pink, partnered with the Italian powerhouse that’s Valentino, and with the mastermind behind it: Pierpaolo Piccioli. Away from the mere viral moment, this collaboration sets the tone in not just a much more collaborative stage found in the fashion and arts industries, but it reignited our most primal need for wonder and mystique. Thus, the runway presentation in early March of 2022, a giant Pink PP box with a collection of monochromatic fuchsia looks in 3D volumes and outstanding shapes, was an invitation into a new world of hope and mirage to the new future awaiting us. This collection is very much in line with a return of the hyperfeminine aesthetics of the early 2000s. Yet in this day and age, this revisitation is made with the critical eye and boundless creativity we’ve so rightly achieved, away from past norms. 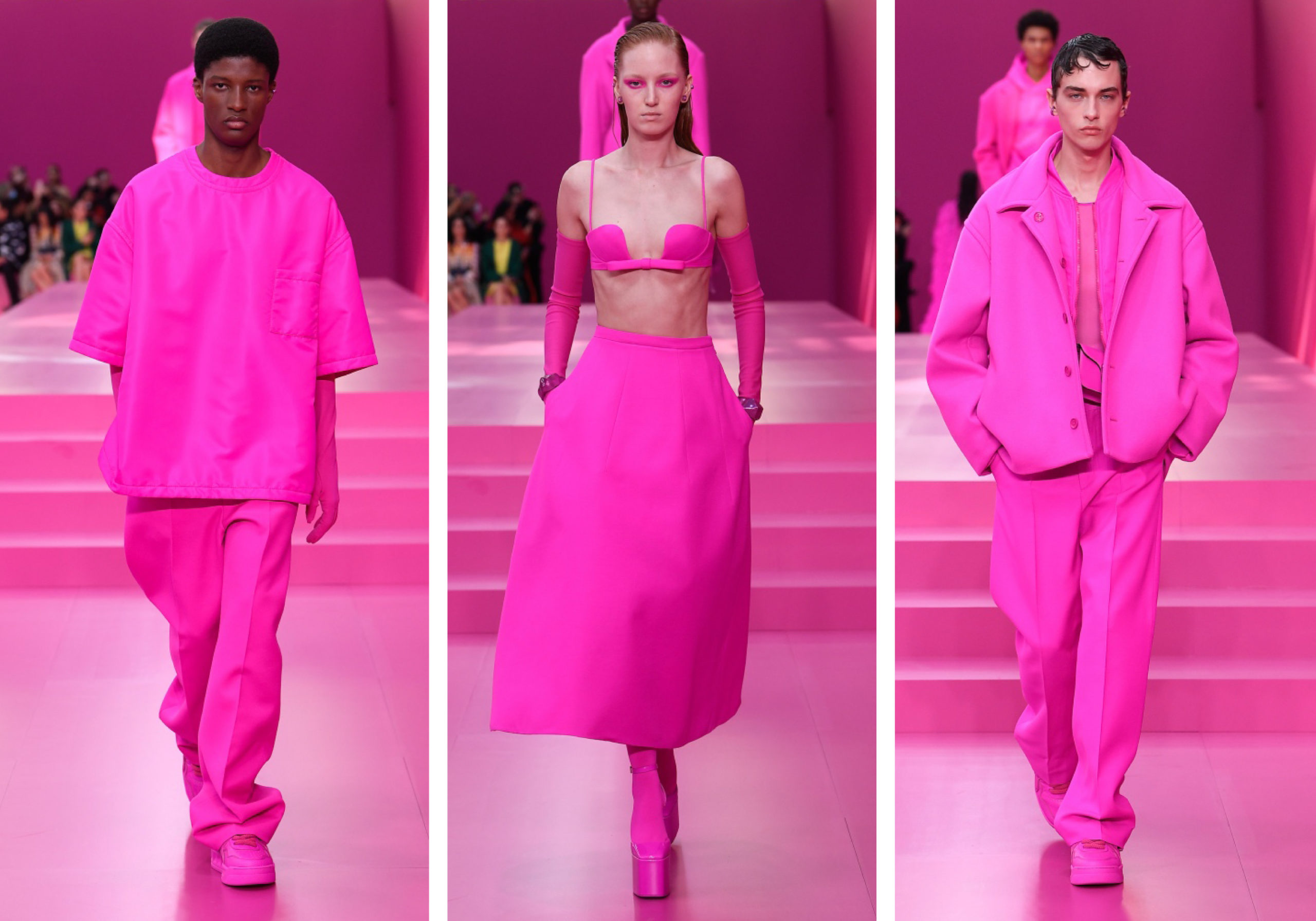 Consequently, the Pink PP collaboration is more than a marketing game or a demonstration of design mastery. This movement in fashion symbolized our societal screams for outward positivity, our need for new joy and a revindication of what it means to be alive in 2022.

In store, our selection of the Pink PP Valentino collection includes the One Stud bag, a double breasted pink suit, a dress with flowers printed in 3D and one a model of the very popular One Stud pumps, this time in the Pink PP monochrome, as well as a gorgeous Pink PP coat. Discover the Valentino Pink PP collection, both in store and online.

PINK PP: A story of Valentino, Pantone and the color of the year

THE RETURN OF MIU MIU

NEW IN: Sandals by Suicoke and Yume Yume